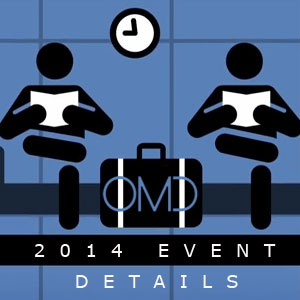 YOU HAVE MISSED THE 2014 OMD EVENT

Having carefully considered the cost of venue hire, parking and accessability, it was decided that Altrincham offered the best value for money and transport links. These factors allow us to pass the benefits on to you the loyal OMD fans.

Our schedule for the weekend remains subject to change

FRIDAY 17TH OCTOBER
MEET & GREET
Get an opportunity to meet fellow OMD fans as we take over the Pelican Inn.
To ease you into the weekend, we’ll also be playing a chilled out set of OMD
material. If you’re a fan of the more ambient side of OMD, then sit back and
enjoy a variety of B-Sides, obscure rarities and album cuts.
OMD QUIZ
Test your OMD knowledge with this specially prepared OMD Quiz.
SATURDAY 18TH OCTOBER
OMD MEMORABILIA DISPLAY
A selection of records, press cuttings, clothing, badges, photos and other rare
memorabilia. Look back at OMD’s 35 years in the music industry from Eric’s
Club through to English Electric.
ANDY VIDEO Q+A
Andy McCluskey has generously given up some of his time to answer a series
of Q&A’s submitted by fans. This video is exclusive to this event and will be
screened over the weekend.
JUNK CULTURE TALK
2014 sees the 30th anniversary of OMD’s Junk Culture album. OMD archivist
Paul Browne (founder of the Official OMD Website and currently running the
Messages website) will be conducting a visual talk on the development of the
album, exploring the path that the band took in the post-Dazzle Ships world.
OMD CLUB NIGHT
An OMD Party is never complete without a night of OMD tunes served up by
our DJ team, featuring Fred Kent. Expect to hear a broad selection of OMD
songs, from classic album tracks to remixes and of course the dance pop
perfection of their many hit singles!
BUFFET
Included in your ticket price is a special buffet meal, which will be served from
9pm.
CHARITY RAFFLE
Marie Curie Cancer Care provides support and care for those afflicted by this
terrible illness. The OMD Party will be helping to raise funds over the
weekend with the help of a special Charity Raffle. Expect some rare OMD
items to go under the hammer as you help to assist a good cause.

At the time of publication these details are subject to change and exact times may vary.